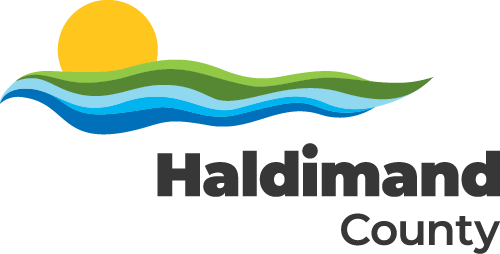 The Haldimand County logo portrays the county’s natural beauty while symbolizing its potential as a great place to live, work and play. Visually, the layers symbolize the landscape and waterways while the dynamic upward shape communicates a sense of optimism and opportunity. The sun emphasizes the fact that in Haldimand, “anything is possible” with the sunrise being a metaphor for a new day or a sunset occurring after a day well spent. The primary font is strong and clear and reflects Haldimand’s authentic character.

Haldimand County’s logo is our corporate signature and like any signature, we are the custodians of where it appears and how it is used.

Usage of the logo and coat of arms, both internally to Haldimand County and externally by other organizations, has been set out by Council in the policies listed below:

The use of the logo for commercial enterprises is strictly prohibited (i.e. used on a sales flyer for a local business)

The logo is permitted for use by non-profit organizations, with approval, on the condition that it be used to promote Haldimand County in a positive way and conforms to the standards of good taste.

Should your application for the use of Haldimand County’s logo be denied, you have the right to appeal through Haldimand County Council.  Contact by email at clerk@HaldimandCounty.on.ca

If you have any questions about the use of our logo, please contact us by phoning 1.800.863.9607 or by email at opportunity@HaldimandCounty.on.ca 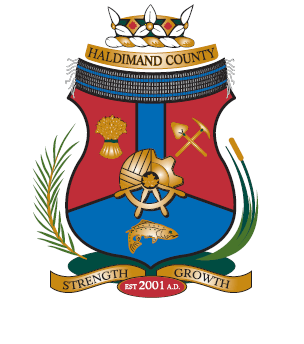 Representing all that are subject to the laws of Canada. We felt that a simplified version of the crown allowed for a cleaner and more perceptible symbol.

The three trilliums in the crest represent the three former municipalities (Haldimand, Dunnville and Nanticoke). It is also the Ontario provincial flower and is typical flora of this area.

Represents an historical artifact used by the Six Nations Indians as a belt or sash on which hieroglyphic records were strung with polished shells. This particular belt portrays a Two-Row Wampum Belt.

The Two-Row Treaty is a formal agreement between two nations. Three rows of white beads, which symbolize peace, friendship and respect, separate the two purple rows. The two purple rows depict two paths, or two vessels traveling down the same river. One row symbolizes the Iroquoian Confederacy with its law, customs and ways and the other symbolizes the European nations. Both paths or vessels move side by side in the same direction, neither interfering with the other.

An indispensable element of a coat of arms, representing unity and working together in harmony. The shield is a strong, central element on which the symbols of identification are fixed. The design borrows from the 1850 version of the old Haldimand County coat of arms.

The shield also reflects our three-in-one theme with its three sections of the shield.

The dominant colours, gold, burgundy, blue and green symbolize the riches of the land, the waters that replenish it and the people who call this area home. The same colours are also used in the Haldimand County logo.

The very centre of the shield represents the Grand River and its destination, Lake Erie. The central position on the shield indicates the vital importance of both river and lake to farming, industry and recreation throughout Haldimand’s history.

Represents the use of the Grand River to power the flour and grist mills which sustained early settlements.

Represents industries and labour of the people of the past and present, evoking the industrial development which has provided many people of Haldimand with employment.

Represents the popularity of sports fishing which has made the Grand River one of the best known destinations in North America. It also symbolizes the commercial fishing industry which has flourished along Haldimand’s waterways since the early 1800s.

Represents early water transportation and the Grand River Navigation Company which is a significant part of Haldimand’s history.

Represent the natural life of many marshy areas found along the river’s edge and throughout Haldimand County.

Represent many trees that can be found growing along the river and elsewhere in Haldimand. The branches of the willow show flexibility and strength.

Hinting at excellence and the history of the County, we felt that the motto should reflect how strength is gained through a unified people.