In an effort to help long-term care home residents stay connected with their loved ones throughout the pandemic, Haldimand County Mayor Ken Hewitt & Norfolk County Mayor Kristal Chopp launched an initiative to bring iPads to these homes. On Tuesday, April 28, 2020, mayors Hewitt & Chopp made their first delivery of 10 iPads, headsets and iPad cases to Anson Place in Hagersville.

iPads were received in the parking lot of Anson Place by recreation volunteer Wesley Devries. The iPads will be used by volunteers and staff to keep residents engaged and connected with family and friends. 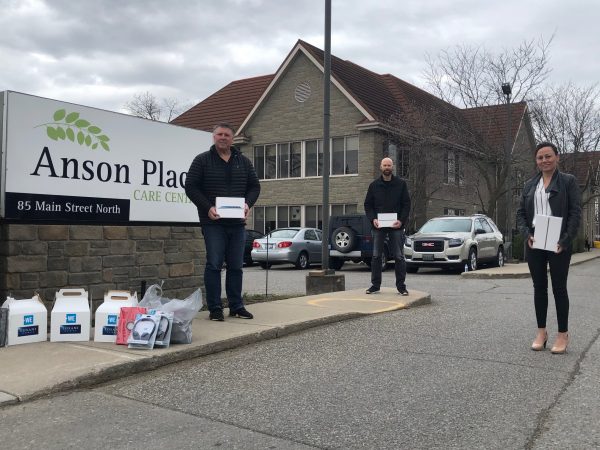 “We reached out to a few businesses with the idea of donating iPads and headsets to our long term care residents and was absolutely amazed at the response. What started with bringing a couple of iPads has grown to now over 60 iPads and 200 headsets,” said Mayor Hewitt. Hewitt noted that the biggest hurdle was actually acquiring the iPads due to increased demand, but the first shipment arrived and more are on the way.

Initial contributions from Empire Communities, Losani Homes, Ballantry Homes, Pattern Energy and the McKeil Family Foundation helped get the program off the ground.

“The outpouring of community support we’ve received is incredible. From making masks to donating medical supplies, PPE, iPads and everything in between, residents and businesses have truly stepped up to support one another. It’s the Haldimand way,” Hewitt added.

“Now more than ever, it’s important to keep in touch with loved ones – especially those who live in long-term care homes, who can’t see visitors in person right now,” said Norfolk County Mayor Kristal Chopp. “It brings me great joy to know these deliveries are helping to connect seniors with their families during such a difficult time.”

Mayor Hewitt is hoping to bring iPads to all long-term care residences in Haldimand & Norfolk counties. He encourages anyone who is willing to assist in securing either funds or iPads to contact him directly at mayor@haldimandcounty.on.ca.